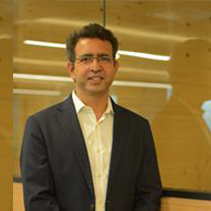 Parag Sharma is Founder and CEO of O2 Power, a renewable energy platform.

Set up in November 2019, O2 Power has raised 500 million USD from global investors, EQT and Temasek to develop and execute utility scale renewable energy projects in India, including large scale wind and solar projects. Within the last twenty months, O2 Power has become one of the fastest growing renewable companies in India having bagged five solar projects (three in Rajasthan, one in Gujarat and one in Madhya Pradesh) with a cumulative capacity of 1580 MW, and is in the advance stage of multiple greenfield project bids and acquisitions currently.

An industry leader much respected for his achievements in India’s renewable energy sector, Parag also occupies the chair of the Vice-Chairman at Confederation of Indian Industry's National Committee on Atmanirbhar Bharat - RE Manufacturing. Additionally, he is also the Vice Chairman at WIPPA – Wind Independent Power Producers Association.

Before starting O2 Power, Parag was Chief Operating Officer at ReNew Power, India's leading renewable energy IPP, for eight years. He was instrumental in setting up 5 GW of wind and solar capacity at ReNew.

Further, Parag has spent significant ten years in the consulting industry. He was Director, Strategic and Commercial Practice in KPMG’s transaction service division specializing in the infrastructure sector. He started his career with ABB and was part of the commissioning team of India’s first IPP GVK, Jegurupadu (a 235 MW CCPP). Parag has spent about 23 years in the power sector.

Parag is an MBA from IIT Delhi, LLB from Delhi University and Electrical Engineering from AMU. He is a passionate long-distance marathon runner. Parag lives in Gurgaon with his family.