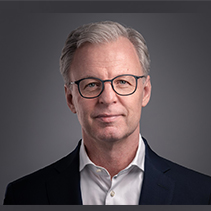 Lars Bondo Krogsgaard was appointed CEO of the Onshore Business Unit and a member of the global Executive Committee at Siemens Gamesa Renewable Energy on 1 November 2020.

Mr. Krogsgaard, who started his career as a business lawyer and also holds an MBA degree, has solid experience from the renewable energy sector.

Upon leaving the legal profession he worked for Ørsted (formerly DONG) before joining Siemens Wind Power in 2006 to eventually become responsible for the company's onshore activities in EMEA.

From 2010 to 2017 Mr. Krogsgaard was a member of the Management Board at Nordex, initially as Chief Customer Officer and, eventually, the company's CEO.

Mr. Krogsgaard led the integration of Nordex and Acciona Windpower and during his tenure the company became a truly global company doubling its market share at steadily improving margins.

Mr. Krogsgaard served as Co-CEO of MHI-Vestas Offshore Wind until November 2019, and, subsequently, worked as a consultant with private equity matters and renewable energy and infrastructure investments before joining Siemens Gamesa Renewable Energy.